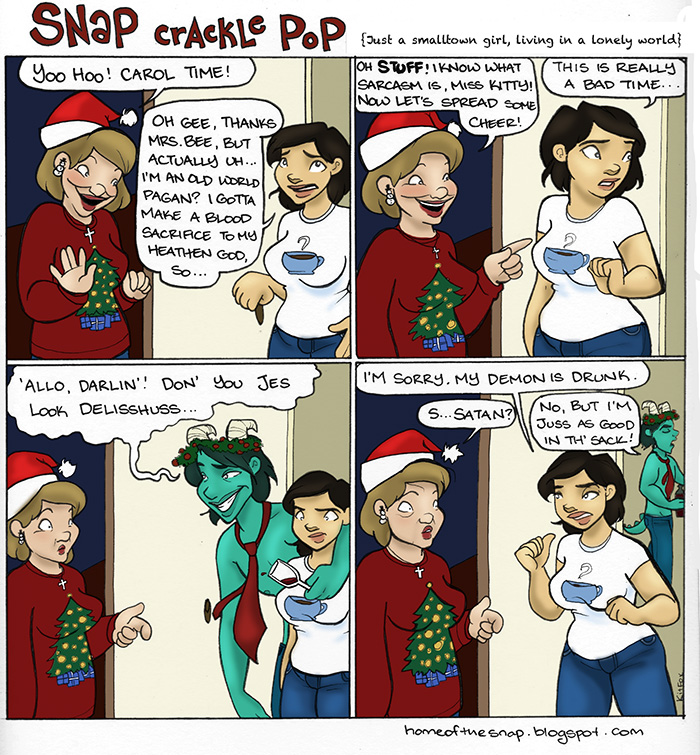 I know it's late, and I'm sorry!  If you knew what I've been having to get done recently, you'd understand.  Have a little late holiday cheer!
Posted by Kit Fox at 10:05 PM 1 comment: 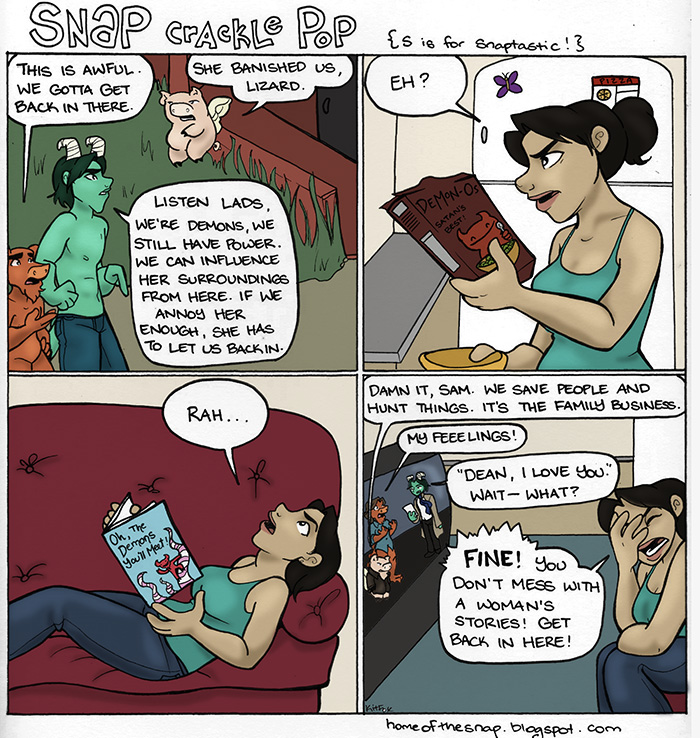 Aren't demons just the worst?
A reminder, a week before Christmas, that the Snap Crackle Pop Schwag Shoppe is open and ready for your money!  Seriously, it's fun stuff, all designed by yours truly, so if you need something for that hard-to-shop-for pal, stop in!  We'd love to have ya. 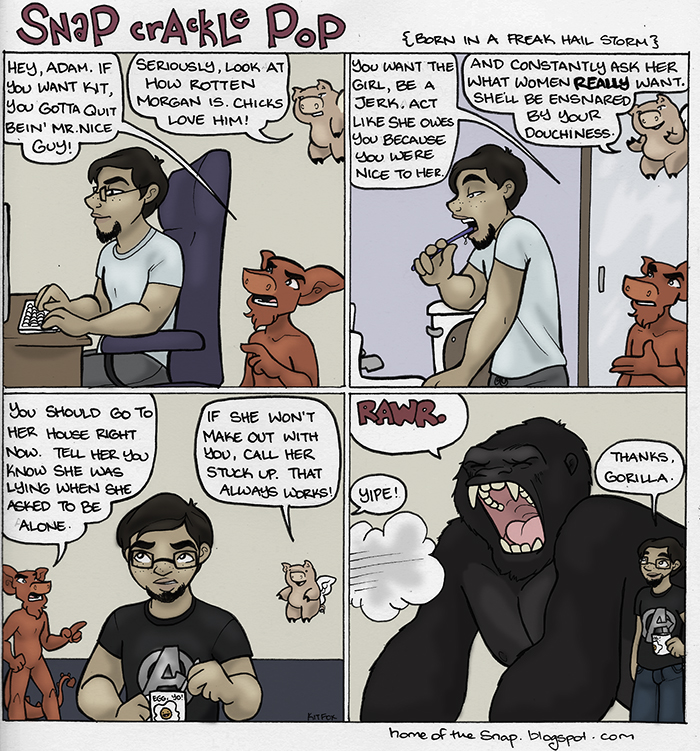 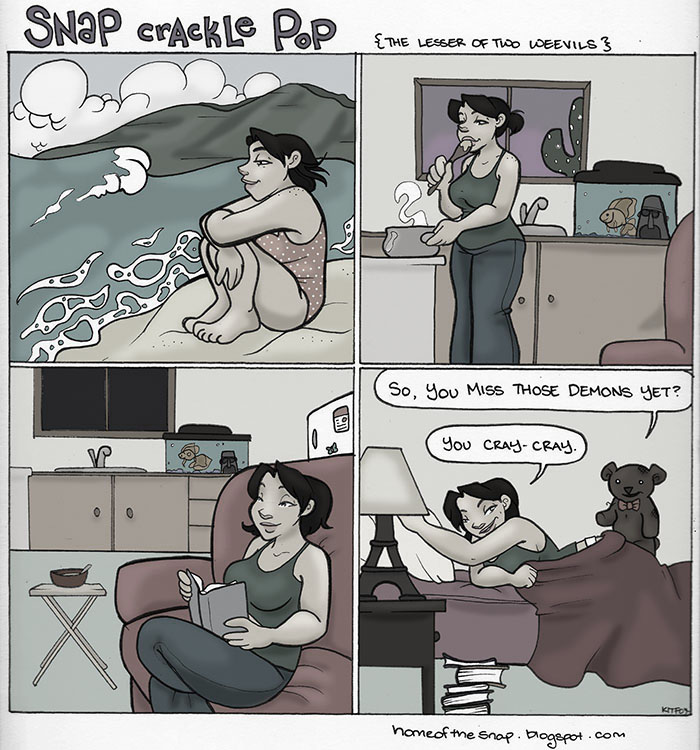 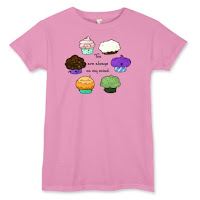 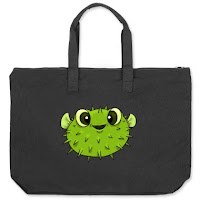 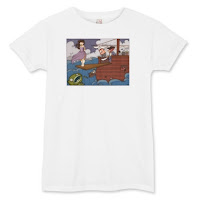 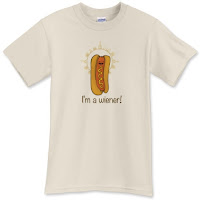 Think it's about to open my Snap Crackle Pop Schwag Shop!

I've put together a bunch of designs of some SCP art, but mostly designs based on reader-chosen favorite shirts worn by the characters.  Now you can confuse all your pals with the oddity of an "Egg, yo!" shirt, or make them stare inappropriately at your puffer fish.

You already look great.  Get this stuff on that hot bod!

http://www.printfection.com/snapcracklepop
Posted by Kit Fox at 10:30 PM No comments:

Homeless demons are the worst 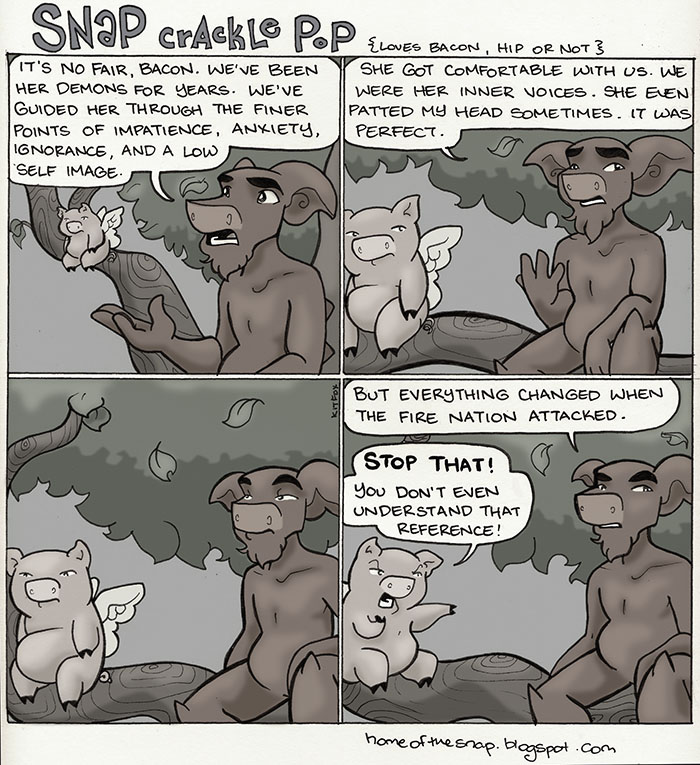 The perils of commitment phobia 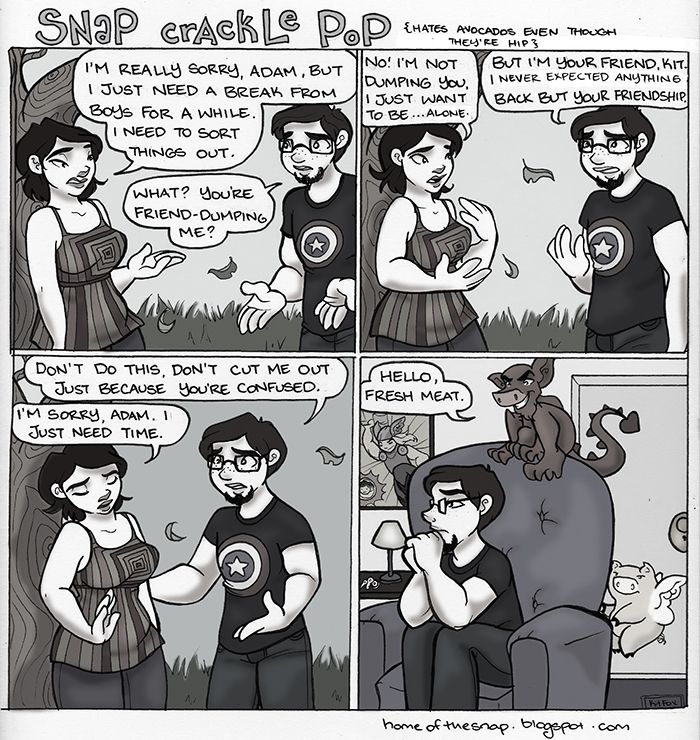 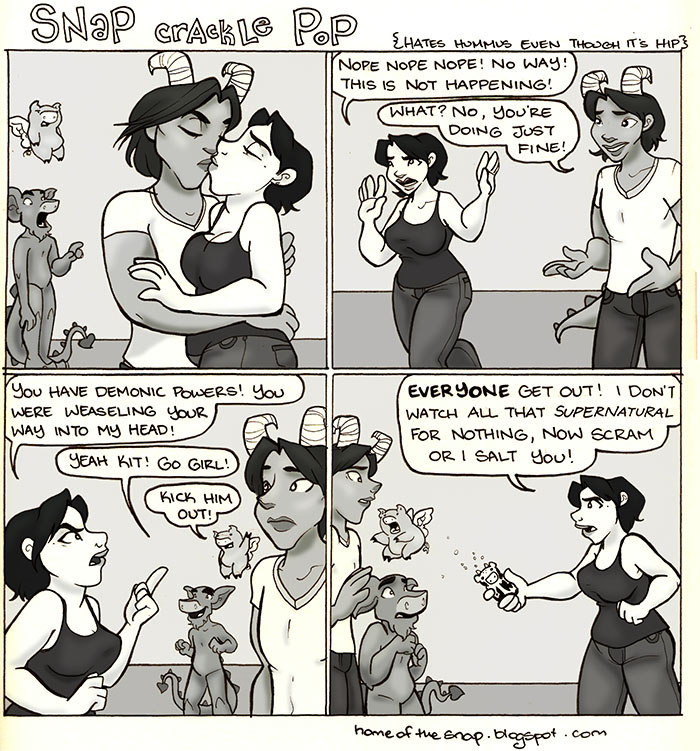 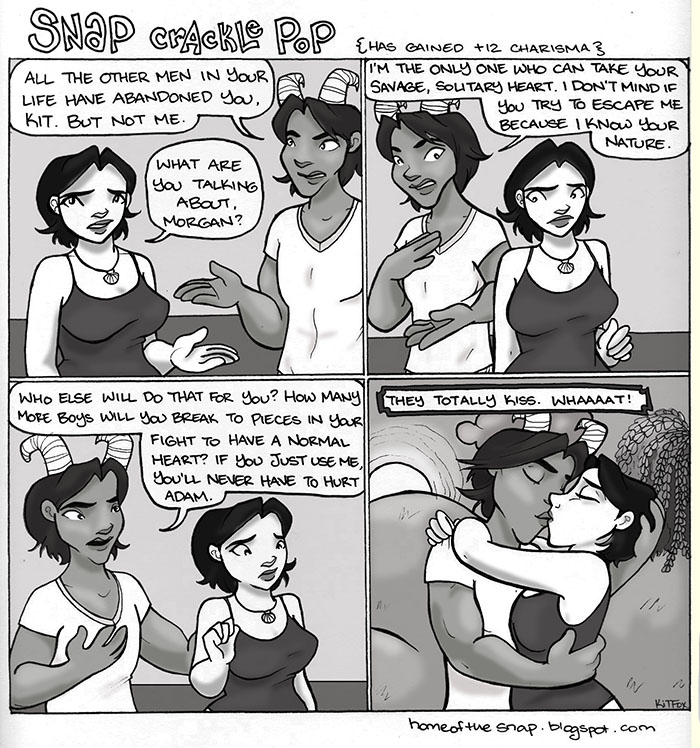 This one's gonna get complaints... 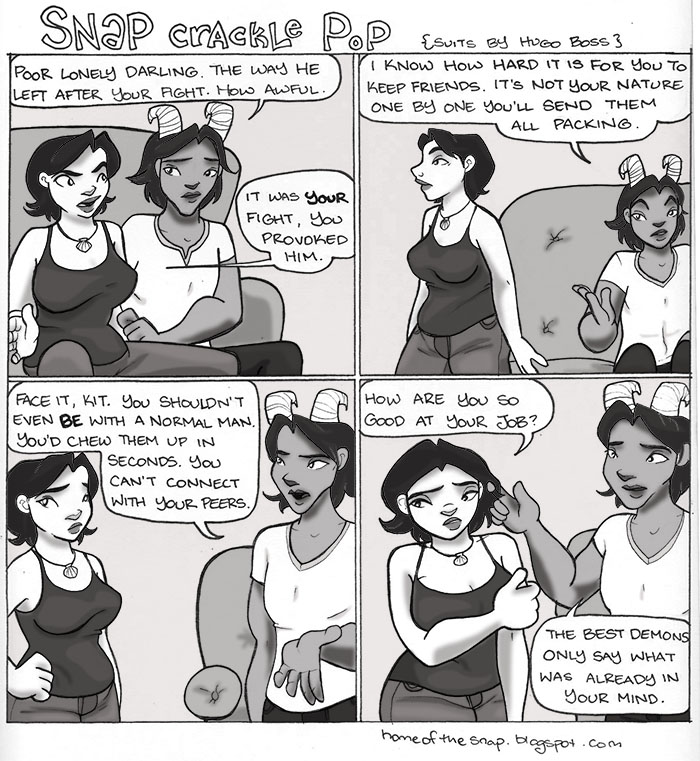 Started experimenting with digital color.  It ain't easier, but it looks cleaner.  Thoughts? 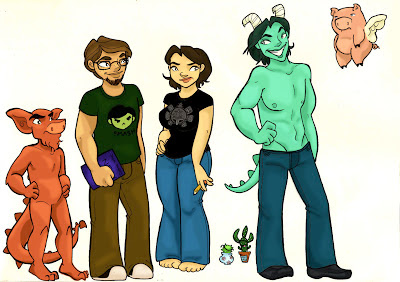 Thought I'd experiment with some digital color.  I still have a long long way to go... 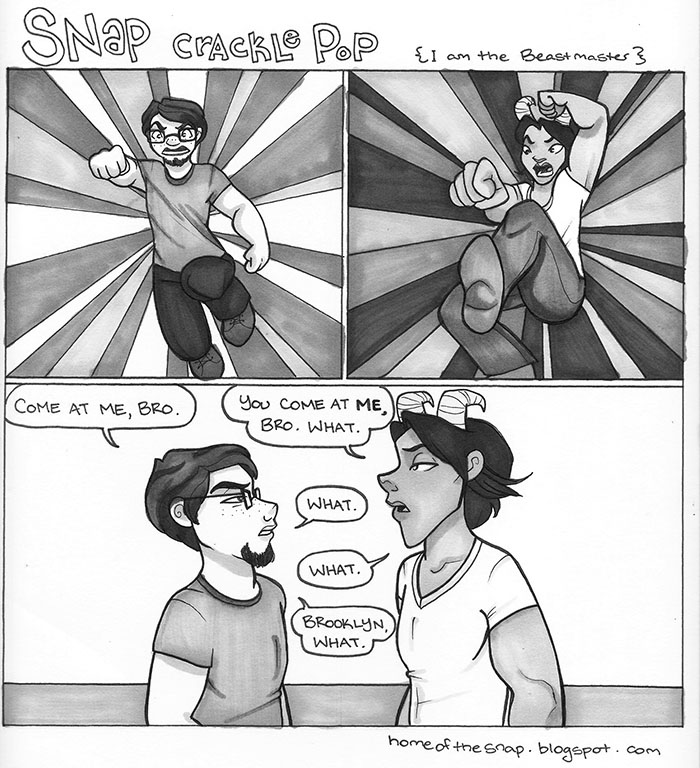 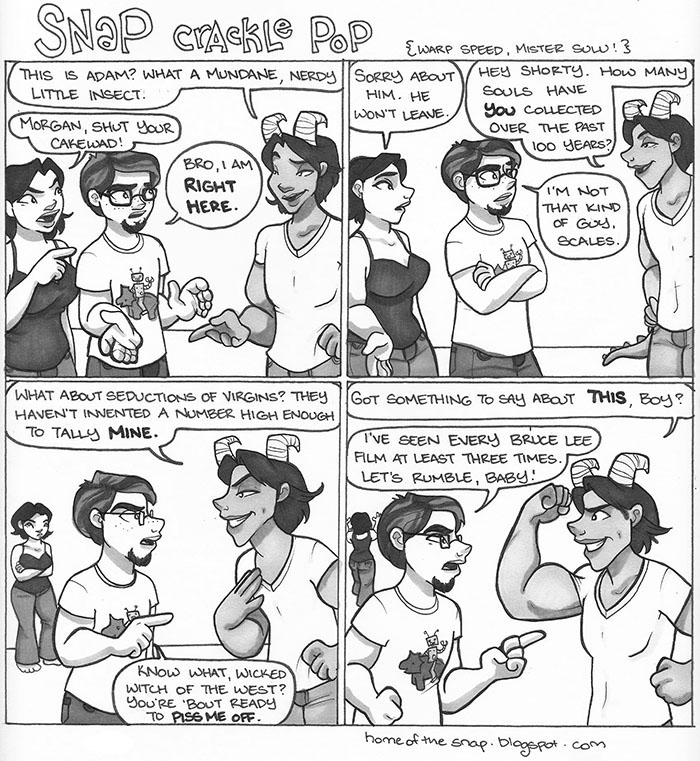 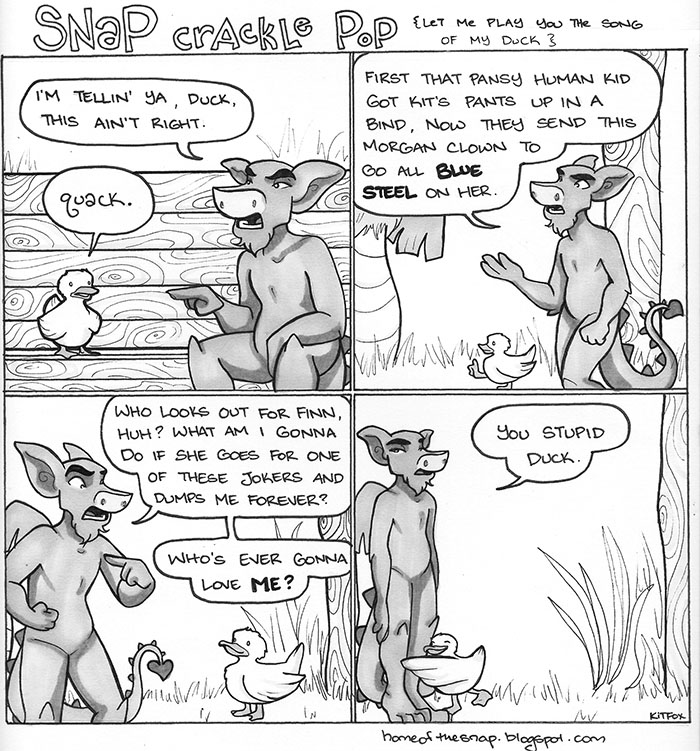 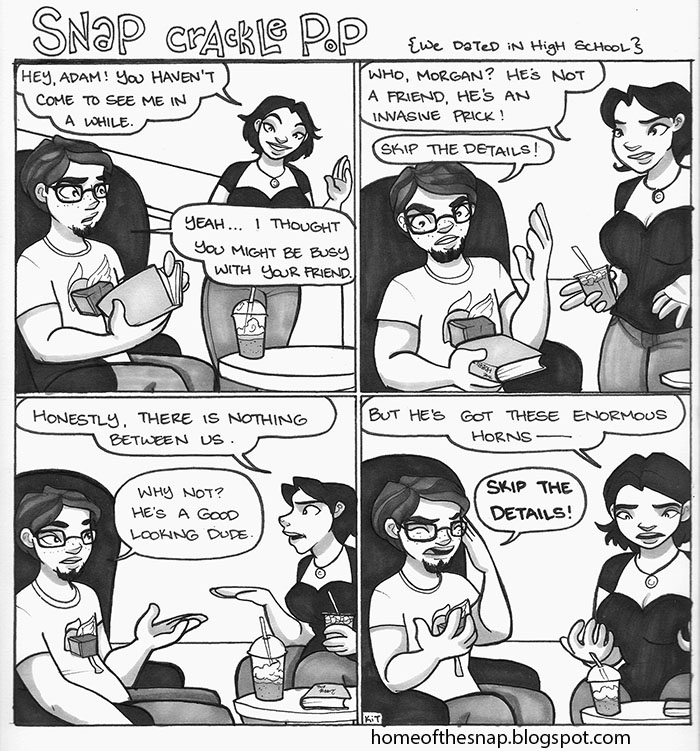 Flowers From The Devil 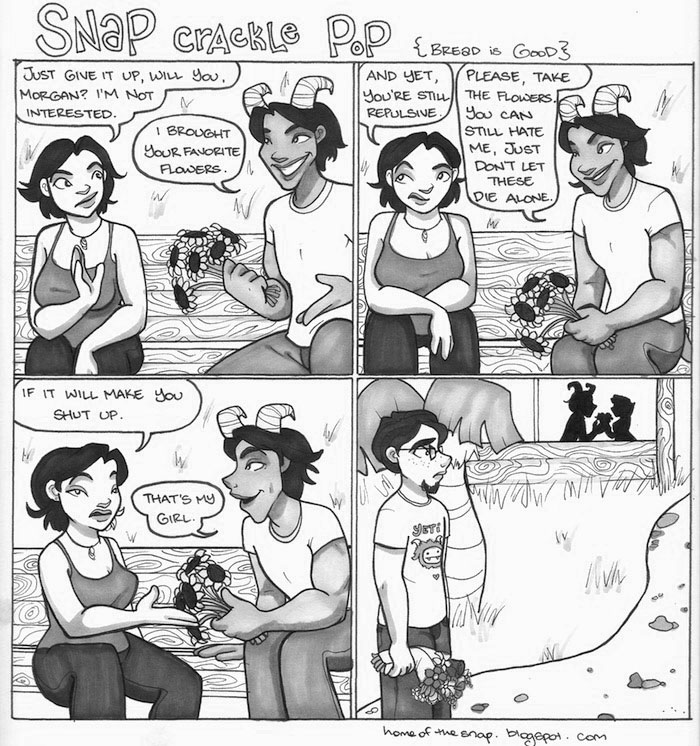 Poetry Is For Fools

This poem is taken from Pablo Neruda's "XLVI", a badly named but incredibly rich and sexy poem about loving your homeland and being able to command whatever you want, but choosing a troublesome lass in spite of the difficulty.  Only a demon would know this and use it to get him in the sheets. 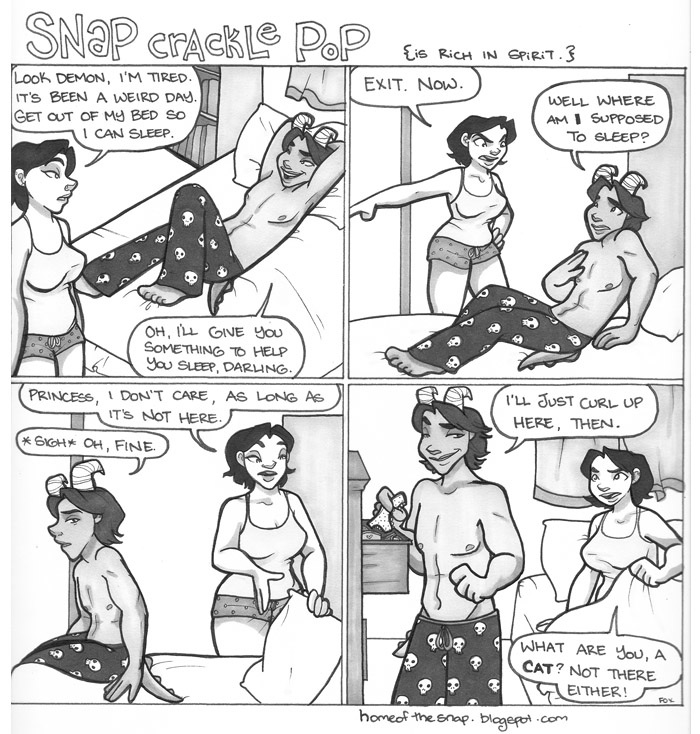 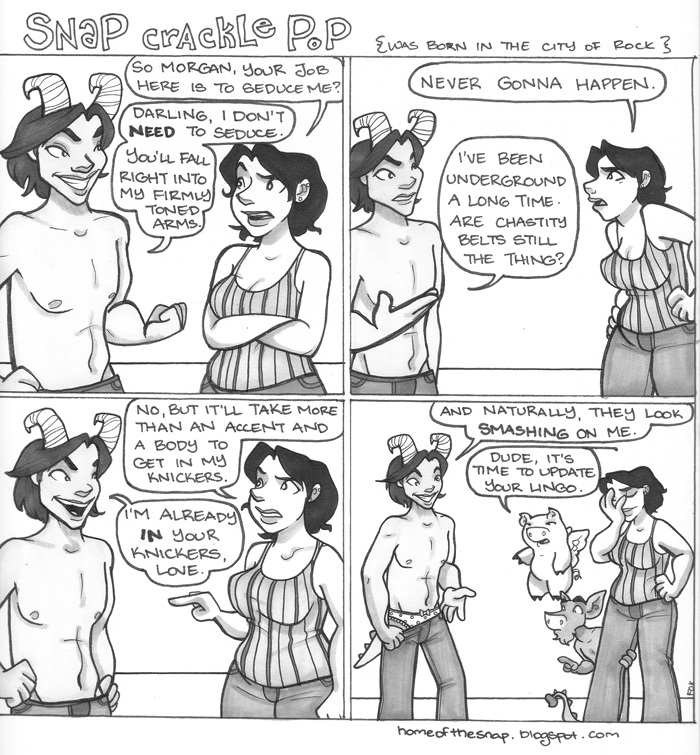 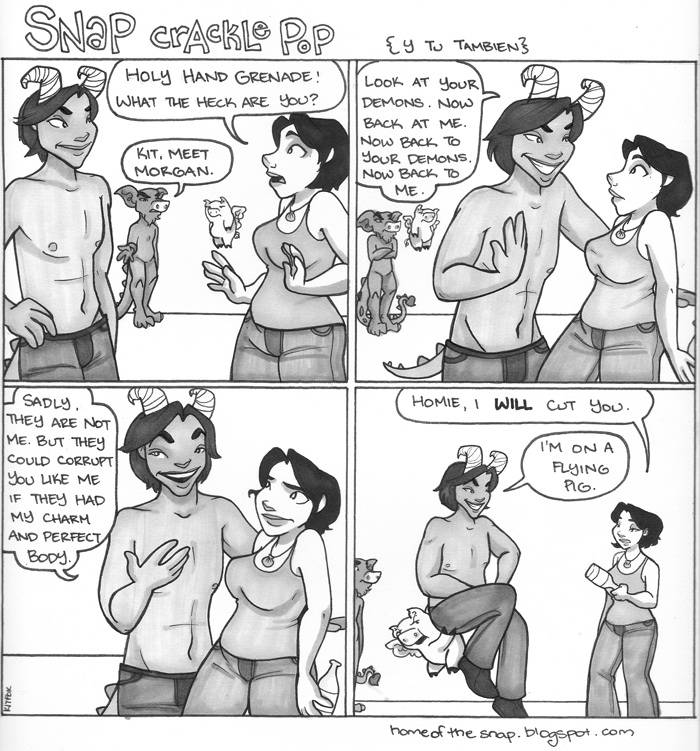 Ladies, this one is yours.

Dude, I am so sorry I'm late!  I got distracted by Pirate Day at work.
... so please stop the nude rioting outside my house. 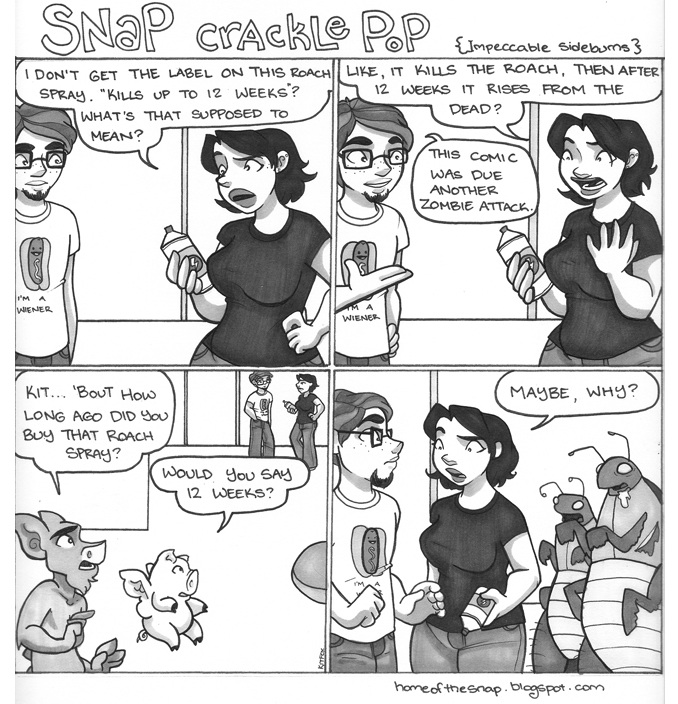 Anyone know why it says that on the spray can?

Just got this awesome review of my comic strip from the entertainment blog, MAGMU!


I also bring you news of a girl and her monsters. Kit is back after a rather lengthy hiatus to entertain us with her art and comic about the humors of life, if it came equipped with annoying monsters and a talking cactus.


Whether you know her as Kit Fox or Elephantblue, you know you love her art. Her style is all her own and her comic is entertaining. Now just because the main character is well, herself, don’t think this is some girly little comic. This four panel comic packs a punch with a left hook of real life and an uppercut of insane fictional characters. She went into hiatus around Christmas Eve of 2011 and we missed the comic very much so. In May, however, she posted a picture in the style like a movie poster stating the comic would return June and would be “Bigger. Badder. Back. Er.” On June 6th, she delivered with an amazing three part “Search for Kit”.

Want to laugh at charcters that you can relate to? Then I suggest you watch Friends on Netflix. Want a crazy fun adventure of a girl and her demons, as they like to call themselves? Then click the link below and read Snap, Crackle, Pop.

Perfect for today, as it is rainy and I made soup.  Enjoy!

Well, I guess I'll come back

Hey y'all, check out the sidebar on this page if you haven't already -- you can buy the book, vote for me on TopWebcomics.com, get SCP in your email every week, and even give me a buck!
Posted by Kit Fox at 11:34 PM No comments:

Sorry I'm a little late!  My internetz crashed on me round midnight.  Enjoy!
Posted by Kit Fox at 11:42 AM 4 comments:

The hunt is on!

Hopefully some of you missed us!  The comic will be back in its old time slot, same Bat time, same Bat place.
Posted by Kit Fox at 12:30 AM 4 comments:

Hey folks! I know I've abandoned you for a while now, but I just have a small update for you. After the official Snap Crackle Pop character interview, reader Mark had a question to add, which I am only now getting around to answering...

Mark: Are we going to see more of Lily Fox in your strip? Also, she looks kind of familiar. Is Lily modeled on one of the employees at Jelly's?

Actually, Lily is my big sister! This must be the only corner of the interwebs where people know who I am rather than her, as she's a pretty famous artist and about five billion times better than me, which I am only cool with because she's my best friend, my inspiration and one of the coolest, most incredible people I know. You can find her amazing art here, but don't start following her and abandon my comic. ;)

She may yet come back into the comic. I'll be honest, I have trouble writing people I actually know, because I always feel dumb writing their dialogue -- to me, it never really sounds like them. But Lily is my best pal, so she's never far away.

And older strip of ours...

Get The Official Snap Book!

Get Snap In Your Email!

Kit Fox
My name is Kit, I live in Hawaii, and I'm the kook behind this here comic strip. If you want to, you can email me at mambo_lotus@hotmail.com. Enjoy the comic!

What they're saying about Snap Crackle Pop

“This strip is full of charm. On many occasions it just oozes cute... there are demons, and elements of high fantasy, in addition to the inclusion of the details of a mundane mortal existence, and all of this makes the strip very uniquely flavorful. I’m doing what I can to catch up to the current listings."
-- Erosarts of Comicslist on DeviantArt.com

"I just had to chime in with my own fan-girl squealage: I read back a ways through your strips, and they're super kewl! (The Hugh Jackman one cracked me up in the most literal of LOL ways.) I also love your lines and rockin' curves; it's a feast for the eyes. Keep up the awesomeness!"
-- Jen of Cakewrecks.com

"You are an exceptionally awesome cartoonist who will probably be super famous one day."
-- John of Cakewrecks.com
"I am more scared about Morgan than ever.
One the one hand, we have a handsome, normal nerd-dude, who (after wayyyyyyy too much patience for anyone other than a saint) is finally trying a different, more direct approach. He wants answers! He deserves answers! He is trying to be nice and even sensitive about it, but come on!On the other hand, we have a ~green~ ~demon-creature~ with a gorgeous body made of sex who has spent centuries perfecting the art of seduction just so he can corrupt (I would assume naive if not virtuous) young ladies for his own pleasure and for his boss (do I have that straight?), who has arbitrarily eased off on the whole "I will ravage you" business and appears to be catering to Kit's moods slavishly. Gee, I wonder which one she'll go for? Oh, and THEN there's a short dragon-demon (who may or may not have a cow-nose) who after years of being an accidentally-sweet and clueless roommate (and after even more years of being misinformed by EVERYBODY about 1 what's important in life 2 what love is supposed to be about 3 how to go about wooing someone and 4 how to do his job), seemingly out of nowhere actually makes a move which everybody - except the person he made a move on - saw coming. Honestly my heart breaks for him. That emotional situation is one of the worst to be in, and there's no happy way out except to find someone else, which takes time. *sigh* I am very, very worried." -- Captain-Black-Rose